Working-class women are turning on Trump 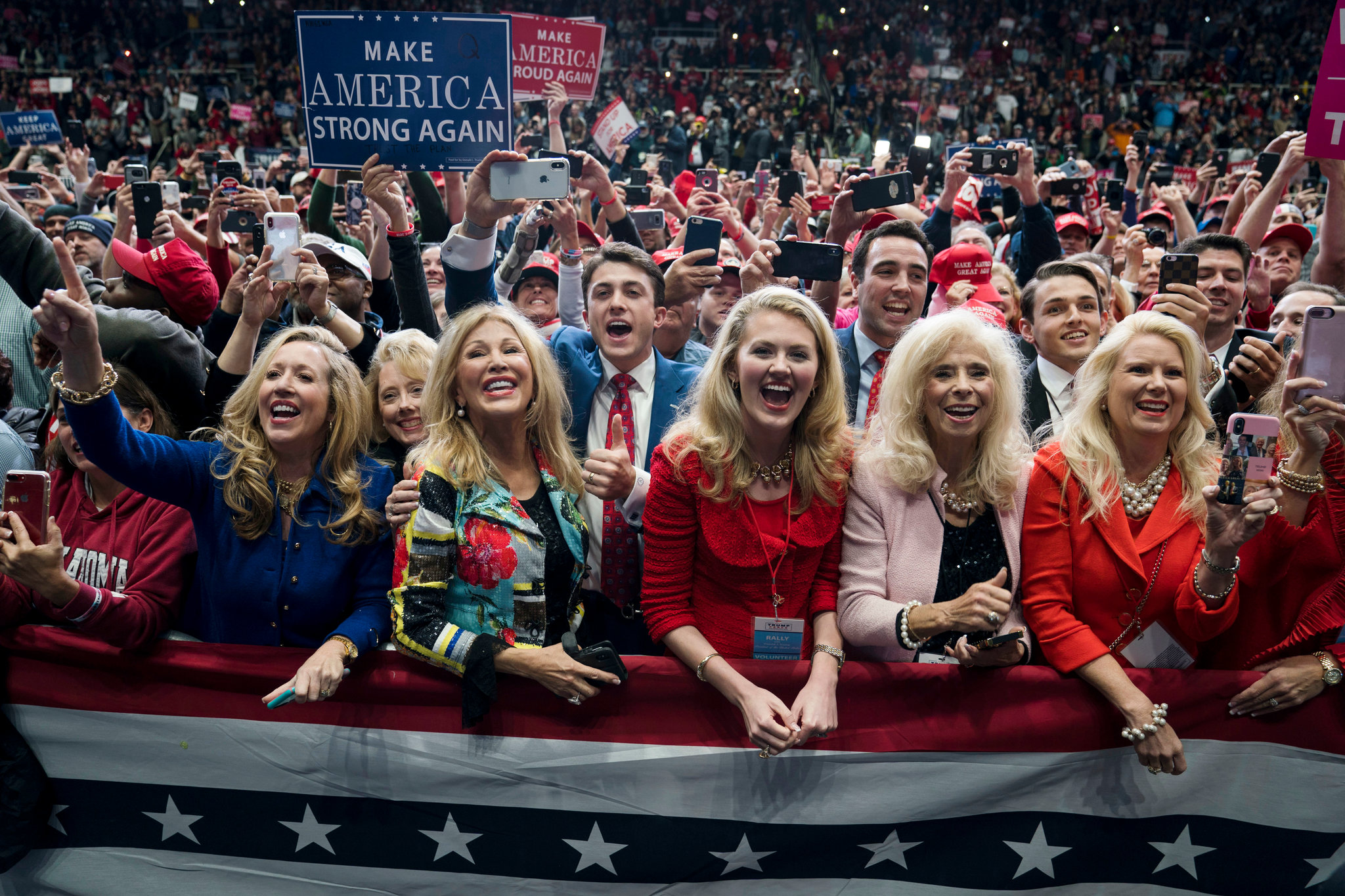 President Trump’s storied grip on the white working class is weakening among women, threatening both his reelection prospects and his party’s efforts to improve its standing with female voters.

While working-class men remain among Trump’s most loyal backers, defections among their wives, sisters and daughters are a big part of the president’s recent slide in opinion polls. That gives Democrat Joe Biden a shot at winning a swath of female voters that have long favored the GOP.

White working-class women heavily favored Trump in 2016. But recent polls show they are being driven away by his combative style, his erratic handling of the coronavirus crisis and his effort to quickly reopen the economy despite health risks.


“These women will be a real battleground,” said Celinda Lake, a Democratic pollster who is working with the Biden campaign. “These women are also cross-pressured, because they are surrounded by Trump-supporting men in their lives.”

Four years ago, Trump won among white women of the working class — which pollsters typically define as people without a college degree — by a 27 percentage-point margin over the white woman at the head of the Democrats’ ticket, Hillary Clinton, according to exit polls. His edge over Biden in that group, however, was just six points in a Washington Post/ABC News poll in late May.

“It took a near-miracle for him to win the electoral college with only 46% of the popular vote in 2016,” said Galston, who has advised six Democratic presidential campaigns. “With 44% of the vote, it would not be possible.”

Surveys in some battleground states have found Biden not just slashing Trump’s lead among working-class white women but overtaking him. In Wisconsin, where Trump beat Clinton among white women without college degrees by a 16-point margin, Marquette University Law School polling has found the president trailing Biden in eight of the nine polls conducted since August 2019.

The Trump campaign and the Republican National Committee have launched a major effort to recapture the support of women who were with him in 2016 but did not show up for Republican candidates in the 2018 midterm elections. “They are called ‘downshifters,’” RNC Chair Ronna McDaniel said in an interview with 19th, an online women’s news outlet. “They were with us, they lapsed and they are easier to get back.”

The goal is to hold on to women like Connie Logerfo, an 83-year-old retired baker in New York who is supporting Trump even though she is unhappy with his handling of the COVID-19 pandemic, including his refusal to wear a face mask to halt the spread of the virus.

“I do like Trump; I think what he is doing is good,” said Logerfo. “But I think he should set a better example.”

It will be hard, however, for Trump to win over women like McKaelyn Henderson, a 22-year-old Republican in San Diego who liked his business policies, but lost patience with his Twitter tirades and what she believes is a cavalier attitude toward the pandemic.

“If he’s not taking issues like this seriously, what else is he not taking seriously?” said Henderson, who is considering voting for Biden or a third-party candidate. “Honestly, I think he needs to stay off Twitter and not let his emotions get the better of him.”

Republicans have suffered from a yawning gender gap for years. The party saw its share of the female electorate dwindle from 42% in 1994 to 37% in 2017, according to the Pew Research Center. Trump drew 42% of the female vote against Hillary Clinton, exit polls found, despite his big margin among white working-class women.

His election spawned a backlash among female voters that was evident with the massive Women’s March after his inauguration and helped Democrats win control of the House in 2018. Women voters favored Democratic candidates by 19 points.

To try to recapture support among women, the RNC and the Trump campaign are using a sophisticated data operation to target the downshifters, inviting them to Women for Trump events and other new outreach programs that have gone online during the pandemic. The RNC said it has hosted 110 women’s events since the shutdown began.

“There are so many women who support Trump all over the country, but I feel like we don’t always get to meet each other,” Danielle D’Souza Gill, a conservative writer, said during an online event for young Republican women. “So sometimes it kind of feels like you’re the only one.”

One party official said the online format has helped in reaching working-class women who might otherwise struggle to get to an actual meeting because of child-care demands or because they are in a remote town.

A Trump campaign official shrugged off troubling poll findings and insisted that the president is “making strides” with women. The official pointed to an increase in the share of campaign donations that come from women. According to the campaign, roughly half of its fundraising comes from women compared with just over a quarter in 2016.

Democratic pollster Stanley Greenberg found signs of waning support for Trump among working-class women long before the country was socked with the pandemic, economic crisis and civil unrest over police brutality against Black Americans.

In focus groups of working-class voters he conducted a year ago in Maine and Wisconsin, Greenberg found that the president had consolidated the support of men. But one-third of the women who had voted for Trump in 2016 said they were considering voting for someone else.

“They pulled off because his ego makes him impulsive and a bully, healthcare remains unaffordable, he’s dividing the country, he doesn’t care about the working class, only the 1 percent, he’s corrupt and out for himself and he doesn’t respect women,” said a report on the focus groups.

Since then, the coronavirus crisis and the resulting economic woes have driven a wedge between working-class men and women: Female voters are more critical of Trump’s handling of the pandemic, men are more eager to reopen the economy, polls show.

“If there were an example in politics of women coming from Venus and men coming from Mars, it’s now in the response to the COVID crisis,” said Lake, the Democratic pollster.

The Washington Post/ABC poll in May found that 71% of white men without a college degree approved of Trump’s handling of the COVID-19 pandemic, compared with 51% of women without a degree.

As most polls find that voters trust Trump more than Biden to handle the economy, the Biden team is trying to cut into that support by telling working-class women that Trump’s policies benefit the wealthy and big corporations, not small businesses and consumers.

“We are the party of the working people,” Rep. Haley Stevens said at a virtual Michigan Women for Biden event that drew 1,200 online participants. “Joe Biden — a man from Scranton [Pa.] — he knows what hard work is. He knows what the values of work means. That’s how we’re going to get out of this. He’s going to get us fair pay, he is going to protect women’s rights.”

Ruy Teixeira, a political demographer at the liberal Center for American Progress, said it might be hard for Trump to win back working-class women because they not only tend to favor more liberal policies than men, but they’ve also tired of Trump’s behavior.


“In 2016, maybe they weren’t yet sick of his style. They are pretty sick of it now,” said Teixeira. “What was keeping some of them in the Trump camp was the need to try something new. But women are more likely than the men to have concluded he’s a divider, not a uniter.”

With Trump struggling to hold on to the working-class women who voted for him, he surely won’t win back Republicans like Teresa Frey, 60, a Navy veteran in Lapeer, Mich., who voted for Clinton in 2016 and cannot imagine coming back into the party fold to vote for Trump.