Trump Was So Shook, Nat’l Guard Brought Ammo To Use Against Protesters 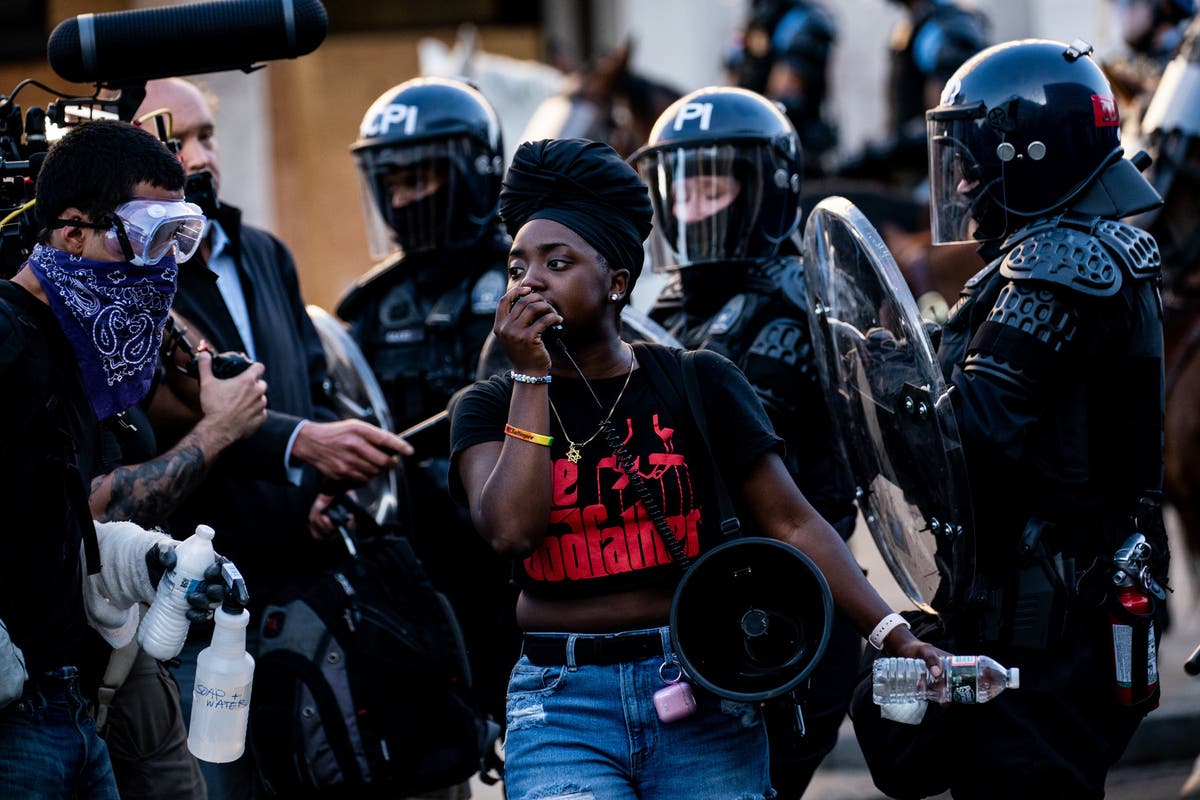 WASHINGTON — A white National Guard commander called the standoff in Lafayette Square “the Alamo,” implying that the White House was under siege. Black members of the D.C. Guard objected to turning on their neighbors. Army leaders told pilots to “flood the box with everything we have” as two helicopters buzzed protesters in the streets.

The National Guard is now engaged in an investigation of the havoc a week ago Monday in downtown Washington, similar to after-the-fact examinations more common to battlefields in Iraq and Afghanistan. There will be questions, interviews and competing narratives.

But on one point everyone is agreed: The first days of June, a calamitous period for the Trump presidency, have been a debacle for the National Guard.

There has been a torrent of criticism from Congress, senior retired military officers and Guard members themselves since more than 5,000 Guard troops — from the District of Columbia and a dozen states — were rushed to the streets of the capital to help in the crackdown on mostly peaceful protesters and occasional looters after the killing of George Floyd in police custody. The D.C. Guard has halted recruiting efforts, and at least four National Guard troops have tested positive for the coronavirus.

D.C. Guard members, typically deployed to help after hurricanes, floods and other natural disasters, say they feel demoralized and exhausted. More than 60 percent are people of color, and one soldier said he and some fellow troops were so ashamed in taking part against the protests that they have kept it from family members.

“Typically, as the D.C. National Guard, we are viewed as the heroes,” said another soldier, First Lt. Malik Jenkins-Bey, 42, who was the acting commander of the 273rd Military Police Company during the first days of the protests. But last week was different, he said.

“It’s a very tough conversation to have when a soldier turns to me and they’re saying, ‘Hey sir, you know my cousin was up there yelling at me, that was my neighbor, my best friend from high school,’” said Lieutenant Jenkins-Bey, who is African-American.

Senior Army leaders — in an effort to prevent what they feared would be a calamitous outcome if President Trump ordered combat troops from the 82nd Airborne Division holding just outside city limits to the streets — leaned heavily on the Guard to carry out aggressive tactics to prove it could do the job without active-duty forces.

Some of the Guard troops were just out of basic training, and others had no experience in controlling disturbances in the streets. Troops were allowed to drive heavy vehicles on the streets without the usual licensing.

In the next days, the Army is expected to release the results of a preliminary investigation into why the helicopters — a Black Hawk and, in particular, a Lakota with the Red Cross emblem designating it a medical helicopter — came to be used to terrorize protesters in Washington.

Ryan McCarthy, the Army secretary, acknowledged that he gave the order for the helicopters to respond, but by the time that order reached the pilots, officials said, it was interpreted as high profile and urgent to disrupt the protests. Officials expect the pilots who flew the helicopters will receive some type of punishment.

And when National Guard officials requested written guidance allowing troops without military licenses to drive armored vehicles around Washington, the officer in charge of the task force, Brig. Gen. Robert K. Ryan, said it was a verbal order from the Army’s chief of staff, Gen. James C. McConville. Written confirmation never came, and a Defense Department official with direct knowledge of the situation said General McConville never gave such an order.

The D.C. National Guard did not respond to a request for comment.

Around 9:15 a.m. Monday, June 1, more than an hour into Defense Secretary Mark T. Esper’s weekly videoconference staff meeting with officials at the Pentagon, an aide slipped a note to the secretary. “I’ve got to go,” Mr. Esper said, ending the call and summoning top aides for a smaller meeting on security in the capital and in Minnesota.

The night before, some demonstrators had hurled projectiles at the police and other law enforcement authorities. The night before that, six National Guard troops had been injured — five hit in the legs with bricks and one hit in the head. Thinly sourced intelligence reports, with no direct corroboration and highlighted in a brief early last week, suggested that fringe groups might try to use car bombs to attack government and law enforcement positions.

Mr. Trump himself was enraged by news reports that he had been moved on Friday night, May 29, to a White House bunker because of the protests outside his gates. The president was alarmed and unsettled by the violence, and by Monday, he was threatening to invoke the 1807 Insurrection Act, which would allow him to order active-duty troops into cities across the United States.

Gen. Mark A. Milley, the chairman of the Joint Chiefs of Staff, objected, saying it was a terrible idea to have combat troops trained to fight foreign adversaries at war with Americans.

A wild scramble ensued to use another option: Summon National Guard troops from other states to reinforce the 1,200 D.C. Guard troops already called up. Unlike other Guard units, the D.C. Guard reports not to a state governor but to the Army secretary, who in turn reports to the defense secretary and the president.
From the Pentagon and a National Guard operations center on Monday in nearby Northern Virginia, officials held a hastily arranged conference call with all of the commanders of state National Guard forces.

The appeal was blunt and urgent: How many troops can you send and when can you send them? Pentagon officials said they preferred troops with previous training in civil disturbances, but they knew they did not have time to be picky.

Tens of thousands of rifle and pistol rounds were stored in the D.C. Armory and partitioned in pallets, labeled by their state of origin, to be used on American citizens in case of emergency.

Other states, like California, were dealing with demonstrations of their own and were reluctant to part with any forces. Some Guard commanders, recalling the lessons of the Vietnam War and the Guard shootings that killed four Kent State students in 1970, were deeply concerned about committing their troops to a vaguely defined urban mission that could put their forces in direct contact with American citizens protesting racial injustice.

But General Milley and Mr. McCarthy warned the Guard throughout the day that if it could not control the protests, Mr. Trump would most likely call in the 82nd Airborne. The pressure was particularly intense on the D.C. Guard, which had the only sizable military force on the streets.

Both Mr. McCarthy and General McConville pressed Maj. Gen. William J. Walker, the commanding general of the D.C. National Guard, to increase his forces’ presence in the city, according to a senior Defense Department official.

General Walker likes to call his troops “the President’s Guard” and sometimes even the “Praetorian Guard” because of their unusual chain of command ultimately to the president. He has close ties to the Trump White House: General Walker’s top legal officer, Col. Earl Matthews, once worked as a senior member of the National Security Council and left under the cloud of the Ukraine scandal last year.image

By 5 p.m. June 1, Lieutenant Jenkins-Bey’s D.C. Guard troops had positioned themselves in a line behind the D.C. police just outside Lafayette Square. The lieutenant had often reminded them that “this isn’t a deployment against the enemy.”

A few hours earlier, Mr. Esper had told the nation’s governors in a conference from the White House call with Mr. Trump that troops controlling the protesters needed to dominate the “battle space.”

Lieutenant Jenkins-Bey made clear to his troops in the following days where he stood: “We’re not here to dominate any battle spaces or anything like that, our job is simply to stand the line between the police and the citizens so that they can say what they need to say.”

Mr. McCarthy, who served in the Army’s elite 75th Ranger Regiment during the war in Afghanistan, pored over maps and strategized with Guard and federal officials at a command post set up at the F.B.I.’s Washington field office in the city’s Chinatown district.

This micromanagement was a last-ditch attempt to keep active-duty troops outside the city.

Military officials scrambled to arrange transport planes to pick Guard members up and fly them to Washington. Most would not start arriving until Tuesday morning, but officials expressed confidence they had enough on hand and en route to tell the president that help was on the way.
But the 82nd Airborne, based at Fort Bragg, N.C., along with a military police unit from Fort Drum, N.Y., was still headed to Washington.

The question was, where should the Pentagon put the incoming combat troops? Attorney General William P. Barr quickly scuttled one proposal to place them at the Marine Barracks just a mile from the Capitol, saying he did not want the troops in the city. Officials agreed on an alternative plan to deploy them to Fort Belvoir, in suburban Virginia.

Thirty minutes before 7 p.m., when Washington’s curfew was to go into effect, U.S. Park Police rushed into a crowd of protesters at Lafayette Square. Lieutenant Jenkins-Bey, in line with his troops behind the police officers, said he was taken by surprise as the assault with tear gas and rubber bullets began.

After the assault, General Milley, clad in fatigues, walked across the park behind Mr. Trump and his entourage for a photo opportunity at a nearby church. And, after that, low-flying helicopters sent protesters scattering.

“The reason you didn’t see Guardsmen commanded by governors use heavy handed tactics in states is because it devalues them, and increases tension at a delicate moment,” said Jon Soltz, an Iraq war veteran who is the chairman of VoteVets.

By Sunday, Mr. Trump — under widespread criticism — ordered the Guard from other states to return home.

On Tuesday, during a conference call with commanders on the situation in Washington, General Ryan, the task force commander, likened the defense of Lafayette Square to the “Alamo” and his troops’ response to the huge protests on Saturday to the “Super Bowl.”

That military response has already had aftershocks for those in the D.C. Guard. In one mass text sent Sunday, Guard leadership told troops “to be wary of ordering food from outside sources as well as any conversations held while in public places.”

“Please be vigilant that some of the DC public does not agree with our mission and may have nefarious intention toward our service members,” the text said.