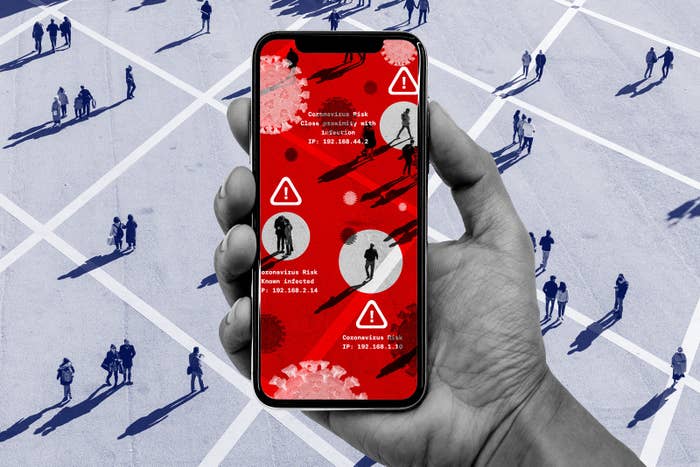 New York's team of contact-tracers, who are trying to discern exposures to the coronavirus and stem another break-out, have been instructed not to ask individuals if they attended a protest.

"No person will be asked proactively if they attended a protest," Avery Cohen, a spokesperson for Mayor Bill de Blasio, told The City. "If a person wants to proactively offer that information, there is an opportunity for them to do so."

Contact tracers track the spread of the coronavirus — connections and potential exposures — "without revealing the identity of the case," Dr. Alain Labrique, an epidemiologist and founding director of the Global mHealth Initiative at Johns Hopkins University, told Mashable.

But as anti-racist protests erupted around the country in late May, after Minneapolis police killed Black man George Floyd, some public officials were using the phrase "contact-tracing" to refer, somewhat obliquely, to police surveillance.

"We've begun doing—almost very similar to our COVID [work] — it's contact tracing," Minnesota Public Safety Commissioner John Harrington said on May 30, just five days after Floyd was killed. "Who are they associated with? What platforms are they advocating for? ... Is this organized crime? ... We are in the process right now of building that information network."

Harrington's announcement wrought concern among protesters, privacy advocates, and health experts, who said he was misleading the public.

"Law enforcement strategies, where they are trying to track people down that are concerning to them, that is not contact tracing," David C. Harvey, executive director of the National Coalition of STD Directors, told Slate.

It is unclear whether anti-racist protests have contributed to a new wave of infections.

"That's the one variable in this equation that we're not sure of," Gov. Andrew Cuomo said in a press conference last week.

City and state officials appear to be striking a fine balance between making pandemic-related assessments, on the one hand, and supporting protests against racism and police violence, on the other.

"Naturally, we have not been able to obtain all information from all positive cases, but engagement among those reached is high," Cohen said.

On June 8, daily cases hit an all-time low, at just 2% of the city population.

Days later, on June 11, de Blasio said the three-day moving average for new cases rose one point to 3% — suggesting that mass protests are not leading to large outbreaks.
on June 17, 2020