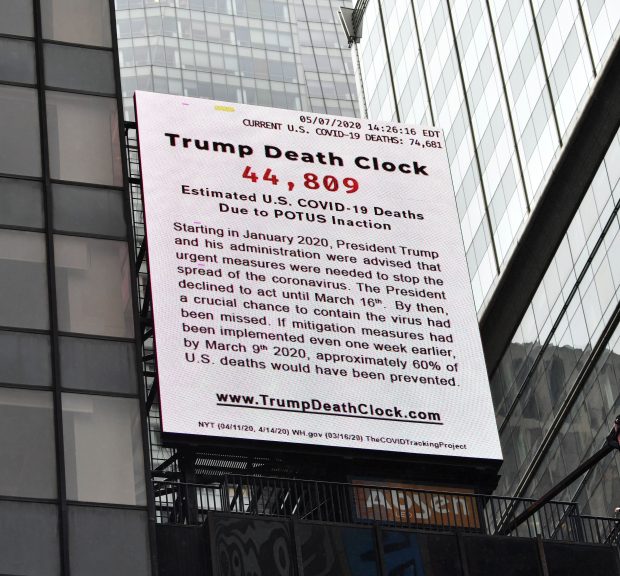 A "TRUMP Death Clock" has been beamed onto an enormous Times Square billboard to show the US coronavirus death toll in real-time.

The enormous ticking tracker was brought to NYC on May 8 and the 56-foot LED screen keeps a running count of the lives lost 'unnecessarily' during the COVID-19 pandemic.

As of May 14, the giant billboard states that 51,154 deaths are a result of supposed "POTUS Inaction."


"Starting in January 2020, President Trump and his administration were advised that urgent measures were needed to stop the spread of the coronavirus," the billboard reads.

"The President declined to act until March 16th," it goes on. "By then, a crucial chance to contain the virus had been missed.

"If mitigation measures had been implemented even one week earlier, by March 9th 2020, approximately 60 percent of US deaths would have been prevented."

The president has touted his January travel ban on China, followed by the restrictions on European travelers implemented in March and nationwide lockdown to stop the spread on American soil, however.

He also ramped up the production of ventilators and other emergency equipment back in March via the Defense Production Act to assist hard-hit states like New York, who are now leading the way when it comes to testing.

The death clock was organized by Eugene Jarecki and several friends, who have criticized President Trump's virus response in the US.

The Peabody-winning filmmaker told The Daily Beast its creation was inspired by the US Debt Clock, a US government borrowing tracker.

And Jarecki has encouraged imitators to make their own version to highlight the coronavirus crisis, which has killed thousands of Americans.

"We want to see people copycat it in small towns and big cities across the country," he told the publication.

"And hopefully people will find out what we found out, which is that billboard space right now goes for a song, because nobody is outside,"Jarecki added.

"It will be much easier for people to make their communities aware."

"If people want to have it in their community, they can reach out to us at deathclock2020@gmail.com and we will help them bring it there — whether it's projecting it on your house or placing it on local billboards."

The data it projects is based on work by two epidemiologists.

The news comes as Trump said China made a "horrible mistake" by concealing the outbreak and said the Feds are putting together a “strong” report on the origins of the virus.

He also said he was "very confident" a coronavirus vaccine will be ready "by the end of the year."

When asked if he thinks another country could beat the US to the breakthrough during a recent Fox News interview within the Lincoln Memorial, Trump said he was unsure.

"I don't care. I just want to get a vaccine that works. I really don't care," the president said.

"If it's another country, I'll take my hat off to them. We have to come up with a vaccine."