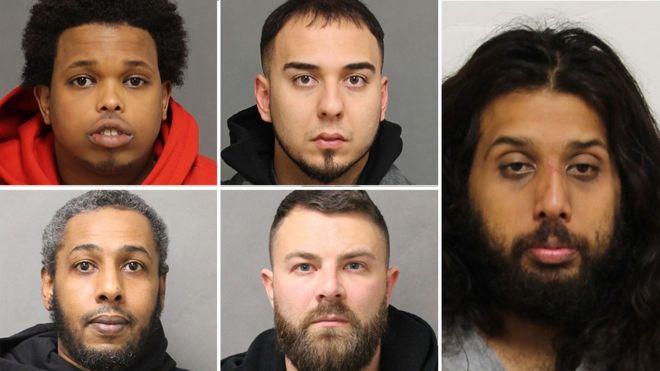 A wanted man has turned himself in after Canadian police arrested four others in connection with the March abduction of a 14-year-old boy.

Solaiman Nassimi, 29, appeared in court on Friday after surrendering Thursday.

According to Toronto police, the boy the five men allegedly abducted was targeted because of his stepbrother's multi-million dollar drug debt.

The brazen daylight kidnapping ended when he was found unharmed in a barn, more than 36 hours after being taken.

On Thursday, police announced they had made four arrests in connection to the kidnapping but a fifth suspect was still at large.

Mr Nassimi turned himself in later that evening.

He, along with Scott McManus, 37, Samir Abdelgadir, 38, Liban Hussein, 25, and Hamed Shahnawaz, 30 - face more than 30 charges including kidnapping for ransom, uttering threats, breaking and entering and arson.

All five remain in police custody while awaiting their bail hearings. Mr Abdelgadi also appeared in court on Friday morning, Mr Hussein and Mr Shahnawaz will appear before court 19 May and Mr McManus 27 May.

A sixth person was arrested on drug charges, but was not believed to have been involved in the abduction.

Police allege the kidnapped boy's stepbrother had stolen C$4m ($2.8m, £2.3m) worth of cocaine from one of the men involved, and has since fled the Greater Toronto Area.

What do we know?
Police believe that the alleged thief's stepbrother, who is not named because he is a minor, was tackled and shoved into a car on his way to school around 8:30am local time on 4 March.

Witnesses reported seeing someone being pushed into a Jeep Wrangler with oversized tyres, shouting "help me".

The boy's school failed to immediately report his absence to his parents, who grew concerned when he did not return home that afternoon and went to police.

Four staff members were put on "home assignment" for failing to report the boy's absence, and have since returned to work.

Police sent out an amber alert for the boy shortly after midnight on 5 March.
Police allege the boy was restrained and held in a remote location about 20km (12 miles) away from where he was originally taken. He was released at some point on 5 March, and was found in a barn around 11pm.

The jeep was found burned out about 60km (37 miles) north of the city.
Police have not released the name of the boy's brother.
By Midufinga on May 15, 2020