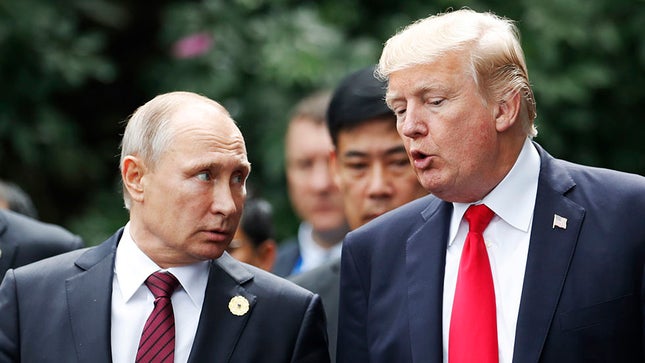 President Trump has officially named Marshall Billingslea as his special envoy for arms control, a role expected to spearhead efforts to reach a nuclear agreement with Russia and China.

The White House announced Billingslea’s appointment in a news release Friday, roughly a month after reports surfaced that Billingslea was chosen.

The appointment comes as the United States’s agreement with Russia, known as the New START Treaty, expires in less than a year

The agreement, which was negotiated by the Obama administration, caps the number of deployed nuclear warheads the United States and Russia can have at 1,550 a piece. There are also limits on deploying weapons, such as intercontinental ballistic missiles, that could deliver the warheads. And the treaty lays out a verification regime that includes 18 on-site inspections per year.


The agreement expires Feb. 5, 2021, but there is an option to extend it another five years after that.

Arms control advocates have urged Trump to immediately extend the agreement, arguing that letting it lapse would mean no legal constraint on the world’s two largest nuclear arsenals for the first time in five decades.

But the Trump administration has said it wants to expand the scope of the agreement, including adding China and new Russian weapons systems. Russia has offered to extend the treaty immediately with no pre-conditions, while China has repeatedly rejected joining talks.

Billingslea is currently the assistant Treasury secretary for terrorist financing.

He was previously nominated to be undersecretary of State for civilian security, democracy and human rights in 2018, but his confirmation stalled as Democrats and advocates raised questions about his role in the George W. Bush administration interrogation program now widely viewed as torture

Billingslea oversaw conditions of detainees at Guantanamo Bay in 2002 and 2003. A 2008 Senate report said he advocated interrogation techniques Congress later outlawed as torture

In his confirmation hearing for the human rights role, Billingslea said he would “advocate for and respect” Congress’s 2015 decision to ban torture.

“Mr. Billinsglea has a troubled history with the Senate Foreign Relations Committee,” Menendez said in a statement Friday. “Following his unsuccessful nomination for the State Department’s top human rights post, serious questions remain concerning whether he was forthright and truthful when testifying before the committee about his role in the detainee torture scandal during the Bush administration
on April 10, 2020