Fears For NYC As Nearly 10,000 NYPD And FDNY Members Call Out Sick 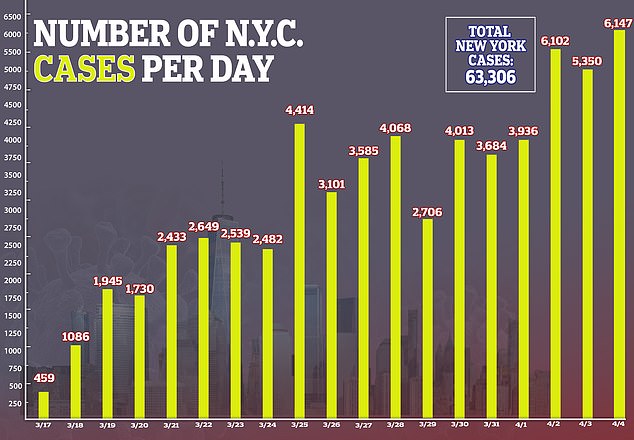 At the NYPD one in six are calling out sick - around 6,500 members in total

The reduction in a police presence has led to an increase in businesses being burgled including supermarkets and eateries in particular.


There are fears of a breakdown in law and order in New York as the city's key agencies feel the brunt of the coronavirus.

The NYPD has reported that up to a sixth of its force, or around 6,500 members called out sick towards the end of last week and the numbers are not expected to improve over the coming days.

Things are even worse at the FDNY with the number of those having to stay at home because of the disease even higher.

One in four members of its EMT paramedic team, about 4,000 people, are currently having to stay off work.

Among firefighters as a whole, around 17 percent are off on sick leave.

The combined number of FDNY firefighters and paramedics no longer able to work is around 3,000 according to NBC4.

The huge shortfall in those working on the front line of the emergency services comes as the city is expected to enter its worst week so far, as the numbers of deaths are expected to continue to rise as the virus takes hold.

The absence of key emergency response workers comes at a crucial time for the city as the coronavirus has led to an all-time high in the sheer number of 911 calls coming in with new records being set almost every day over the last week.

To put in some perspective, a 'busy day' would normally consist of around 4,000 calls, however last Monday the FDNY had to deal with more than 6,500.

FDNY Deputy Commissioner for Public Information Frank Dwyer called the volume of calls received over a three day period the 'largest in our history.'

Residents are now being advised not to call 911 unless the symptoms they are experiencing are severe or not related to the COVID-19 disease.

The grim outlook also applies to hospital too with facilities stretched to the limit on staffing, bed and equipment.

Over at the NYPD the virus has hit just as hard with one in six, or about 18 percent, either sick or quarantined.

The presence of the disease has added a whole new level of stress and anxiety to the work of officers with every arrest or interview having the potential to be infected by the virus.

'It's a stressful job at the best of times,' the police commissioner, Dermot F. Shea last week. 'Right now, I don't think you can imagine a worse point of time.'

Officers are falling sick in areas that endure some of the highest crime rates including the Bronx, Washington Heights and Harlem.

Some precincts reported up to a third of their members were unable to report for duty, according to the New York Times, and there are no guidelines that dictate exactly what should be done.

Emergency protocols for those used after a terror attack or even a hurricane are different to what is occurring now with the emergency lasting several weeks and sickening hundreds more each day.

One thing that has made the work of city cops slightly easier is the absence of any events or large gatherings which they would normally have to patrol.

'It's a stressful job at the best of times,' New York City Police Commissioner Dermot Shea said (pictured) 'Right now, I don't think you can imagine a worse point of time'

'It's a stressful job at the best of times,' New York City Police Commissioner Dermot Shea said (pictured) 'Right now, I don't think you can imagine a worse point of time.'

Rape, robbery and assault crimes have dropped significantly compared to the days before the lockdown was implemented.

'Nobody's on street and that's really helping us,' Shea said.

According to data released by the NYPD for the last month, between March 16 and March 22, there was a 17 percent drop in major felonies while grand larceny was down 31 percent and misdemeanor assaults by 21 percent when compared to the same time last year.

Although many city streets remain quieter with all but essential businesses open, shops along some of the more wealthier streets, including parts of Fifth and Madison Avenues in Manhattan and the trendy Soho neighborhood, have boarded up their shop windows just incase there is civil unrest.

The wealthy businesses had already been ordered closed along with bars and restaurants as part of the shelter in place protections but they are now taking further steps to secure their property and products.

The rows of boarded up buildings are a stark reminder of the newly unemployed workers who lost their jobs after the scale of the outbreak forced stores, bars and restaurants to shut their doors for the foreseeable future.

The NYPD is reporting a 75 percent increase in burglaries of commercial premises compared with the same time last year.

The increase has coincided with the dates when the city ordered bars and restaurants to close and for other nonessential businesses to shut up shop.

'We knew with the closing of many stores that we could see an increase and, unfortunately, we are,' said NYPD Chief of Crime Control Strategies Michael LiPetri to the Wall Street Journal.

There has been an increase in the number of supermarkets and eateries being burgled. At the NYPD, the lack of personal protective equipment which has affected hospital workers across the country may also have exposed police officers to the virus unnecessarily.

According to the Times, some officers say that a shortage of masks and gloves is likely behind the rapid rise in infections.

One detective who eventually had to call out sick with coronavirus symptoms told how he was given an N95 protective mask and a couple of disinfectant wipes which were to last him several days.

The masks are really only supposed to be once before being thrown away.

The NYPD was forced to beg the government to send more masks for officers, only for the White House to turn it into a publicity stunt with the catchy name 'Operation Blue Bloods' and then boast about its own response.

NYPD Chief of Department Terence Monahan (pictured) begged the government to send more masks for officers, only for the White House to turn it into a publicity stunt with the catchy name 'Operation Blue Bloods' and boast about its own response

NYPD Chief of Department Terence Monahan (pictured) begged the government to send more masks for officers, only for the White House to turn it into a publicity stunt with the catchy name 'Operation Blue Bloods' and boast about its own response

On Monday, NYPD Chief of Department Terence Monahan had sent a desperate email to the White House pleading for more protective gear.

Shortages of masks have left officers at an increased risk of contracting the infection, as they are left with no choice but to make house calls across the city without any protective equipment.

The city's cops sacrificing their own health during the pandemic in order to protect New York residents.

'It's so disappointing given the fact that we are revered as the best in the world,' one detective said.

'It's a damn shame that a city like New York that is the epicenter of the coronavirus and the financial capital of the world can't afford a $3 mask,' said another officer working in the south Bronx.

Auxiliary Police Lt. Pierre Moise, who joined the force in 1994 and worked in Brooklyn, also passed away.

The number of coronavirus cases in the U.S. surpassed 300,000 on Saturday, an increase of more than 32,000 from the day before, as the pandemic continued to exact a grim toll on the nation.

New York City accounted for more than a quarter of the U.S. coronavirus deaths.

New York state recorded 630 deaths in the past 24 hours, the biggest one-day toll there yet, taking the total fatalities to 3,565.

'It is like a fire spreading,' New York Governor Andrew Cuomo, of the alarming spread of the virus from the New York City epicenter. 'The fire, it doesn't max out in one place, but it consumes where it is and it's moving out.'

Michigan now has more cases than California, with 12,744 in Michigan and 12,603 in California. Outside of New York City, Detroit is the metro area with the highest death toll, with 223 dead in Wayne County.

White House medical experts have forecast that between 100,000 to 240,000 Americans could be killed in the pandemic, even if sweeping orders to stay home are followed.

New York's Governor Andrew Cuomo said that new cases are still rising at an alarming rate, with New York's apex, or the peak in the number of new daily cases, likely about a week away.

'By the numbers, we're not yet at the apex. We're getting closer depending whose model you're looking at,' said Cuomo. 'We're somewhere in the seven day range.'
on April 06, 2020