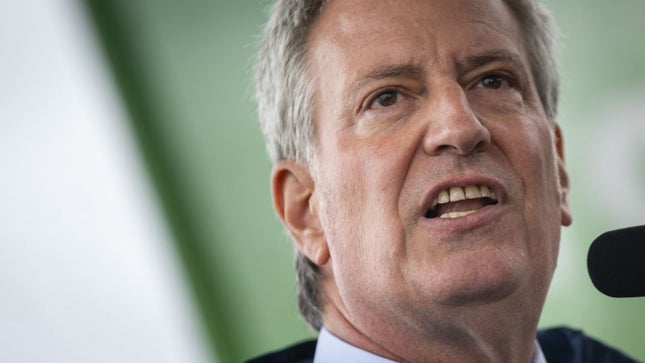 The prison has seen an outbreak in recent weeks, including a New York City Department of Corrections officer who died of the virus last week, one of 13 coronavirus-related deaths in the city.

De Blasio said that inmates charged with sexual assault or domestic violence will not be eligible for release and that prisoners must have at least five pre-existing health conditions and less than a year remaining on their sentence.

"We want to identify anyone in those categories and get them released immediately," the mayor said during a news conference.

The mayor said he was been in discussions with his Office of Criminal Justice, the city’s district attorneys, the Department of Correction and NYPD Commissioner Dermot Shea. “It is a very complicated dynamic, it’s one that we’ve literally never dealt with before,” he said.

“I’m listening to all the input ... But I want to make very clear that I’m making the ultimate decisions, taking in the advice from all these different sources and doing what I think is the right thing for this city,” de Blasio added.

The city has previously released 75 other prisoners in relation to the spread of the virus. Advocates have frequently raised the alarm about prisons and jails as vectors for the spread of the virus, with Jacqueline Sherman, the Board of Correction's interim chairwoman, warning that at least 58 people are being monitored in contagious disease and quarantine units at Rikers and city jails.

“It is likely these people have been in hundreds of housing areas and common areas over recent weeks and have been in close contact with many other people in custody and staff,” Sherman wrote.
on March 25, 2020