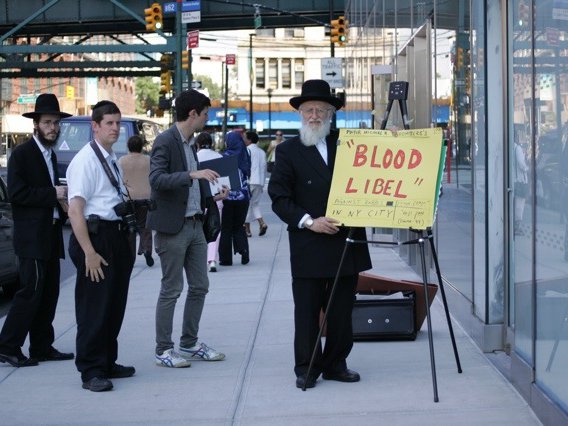 New York health officials are warning against a traditional practice among some Jewish communities after four babies developed herpes after being circumcised by rabbis in the last six months.

Circumcision itself is considered safe, but some ultra-Orthodox groups practice a ritual called metzitzah b’peh, in which a rabbi or doctor known as a mohel uses his mouth to clean blood from the incision.

Health officials don't think that the cases in the four infant boys are related, but have staunchly warned that the ceremony carries risks and that herpes infections can even be fatal to infants, including two who have died after metzitzah b’peh ceremonies since April.

The four babies infected since September, however, have been treated with IV fluids and antivirals and on the road to recovery, but officials warned once more that anyone who directly uses their mouth during the bris could face misdemeanor charges.

Both science and opinion on circumcision are mixed.

Most evidence suggests that the procedure, which is the surgical removal of the foreskin covering the tip of the penis, helps reduce the risk of urinary tract infections for boys and may limit the risk of HIV infection and transmission.

However, it's not considered medically necessary. It is a particularly common practice among Jewish people and required by some sects.

Circumcision or a bris is done within the first month a baby's life and is not believed to be terribly painful to them.

Complications only affect between two and three percent of circumcisions, which are performed on more than 60 percent of baby boys in the US.

However, in the ultra-Orthodox Jewish faith, a mohel, a male religious figure who is sometimes a doctor, sometimes a Rabbi and sometimes both, performs the bris.

And some follow a tradition whereby the mohel uses his mouth remove blood from the cut.

This contact creates the risk of orogenital transmission of pathogens, including the herpes virus.

In 2006, New York introduced requirements that infant cases of genital herpes need to reported to the state. Since then, metzitzah b’peh rituals have led to the infection of 22 babies, including two that died.

To try to limit these incidences, the city required parents to sign consent forms, but later tried to ease tensions between it and Orthodox officials by replacing forms with informational brochures, starting in 2012.

They warn against the metzitzah b’peh, but also advise mohels to reduce risks by using antiseptic mouthwash.

Yet in just three months, there have been three new cases, plus a fourth diagnosed in September 2019.

Babies immune systems are not fully developed and they may not be capable of fighting off the infection.

With antiviral treatment, most can clear the infection. But sometimes the infection can move beyond skin and genitals and strike organs.

In the event of this rare progression, up to a third of babies may die.

The four infants recently infected in New York are recovering, but it's a concern that doctors take very seriously.

City health officials are pleading with the local Jewish groups to take great care, but continue to hope to find a compromise between respect for religious traditions and protecting infant health.
on February 26, 2020