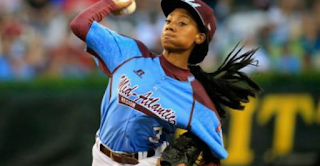 Six years after she grabbed the hearts of the world as the first girl in the baseball Little League World Series to pitch a winning game, Mo’ne Davis is going on to burn up the fields for the well-known HBCU Hampton University.

In her inaugural game for Hampton, located in Hampton, Va., Davis helped the Pirates beat North Carolina A & T 15-4 in the team’s season opener, the Philadelphia Inquirer reported.

Davis, who is from Philadelphia, told the news organization she was a little jumpy about her college-level debut in Greensboro, N.C.

”On the bus ride, I was nervous,” said Davis, 18. “It was the first real game that actually matters so I was a little nervous. But once Coach Angie (Nicholson) said, ‘Go out there and have fun. You guys have worked so hard, just play your game,’ that just shook the nerves away.”

Davis said she is enjoying the calm outside of the spotlight that vaulted her to the cover of Sports Illustrated in 2014 and made her a national hero. For now, she told the Inquirer, she just wants to enjoy the college experience and work on her game.

“I wasn’t really big into the spotlight,” she said. “That’s not who I am. It’s nice to be out here. It’s just fun to be with this team.”

Nicholson told the news organization that one of Davis’ best qualities is her humility.

“It’s the coolest thing ever,” Nicholson said. “She doesn’t make it a big deal. That’s what’s great about it. You would never know it. She doesn’t see herself in that light.”

Nicholson said Davis is one of her best players but she still has to work on her hitting.

Davis said she hopes to improve enough to land a spot on the conference all-freshman team.

”I think this should be a fun season,” she said. “Really, overall, I just want us to do well at as a team, hopefully win the conference — but just to go out there and fight with my brand new family I have and play for them.”
on February 10, 2020