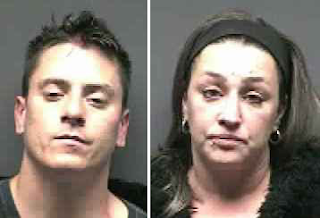 And you thought your worst first date story was bad.

A Massachusetts woman became an unexpected getaway driver after a man she met on a dating app robbed a bank on their first date.

Christopher Castillo, the unnamed woman's would-be Robin Hood, plead guilty this week to armed robbery and three counts of assault and battery on a police officer — all committed on their first date on December 5, 2016 — according to the Bristol County District Attorney's Office.

How her worst first date began
It all started, the woman told police, when she picked up Castillo from his parents' home in Chepachet, Rhode Island, and drove him 30 minutes east toward North Attleboro, Massachusetts. She said he drank wine in the passenger seat of her Nissan Maxima (which is also illegal, but he wasn't charged for that one).


The two had never met in person before that fateful day in 2016, she told police. So why would she think anything was wrong when he told her to pull over as they approached a bank?

He got out of her car and left her there alone for a few minutes. Then, suddenly, he came running back, sweating with sunglasses, a hat, a gun and $1,000 cash in hand, the woman said.

She "panicked," she told police, so she did as she was told.

Her date told bank teller he was 'really hurting'
The district attorney's office fills in the blanks on what happened while he was inside the bank.

Castillo walked into the Bristol County Savings Bank branch in North Attleboro and showed a bank teller a gun. He demanded $1,000 and said he needed it badly — he was "really hurting," he told the teller.

The teller handed him the money, then he ran back out to his date's Maxima and ordered her to step on it.

His accidental accomplice obeyed at first, but once she spotted flashing sirens from North Attleboro Police cruisers on their tail, she immediately pulled over and walked away from the car.

Castillo stayed inside and ducked from police.

Police pulled Castillo out of his hapless date's car as he "violently struggled," spit on them and told them his gun wasn't loaded, according to the district attorney's office.

After he was subdued and handcuffed, police searched the car and found a .44 caliber handgun — an antique belonging to Castillo's stepfather — and the hat and sunglasses that matched the description of what the robber was wearing.

Years after the date from hell, Castillo ended up sentenced to five years of incarceration. His date got off without a charge — and probably with a healthy skepticism toward online dating.
on February 15, 2020