A Coronavirus Pandemic Is Looking A Lot More Likely. Here's What That Means. 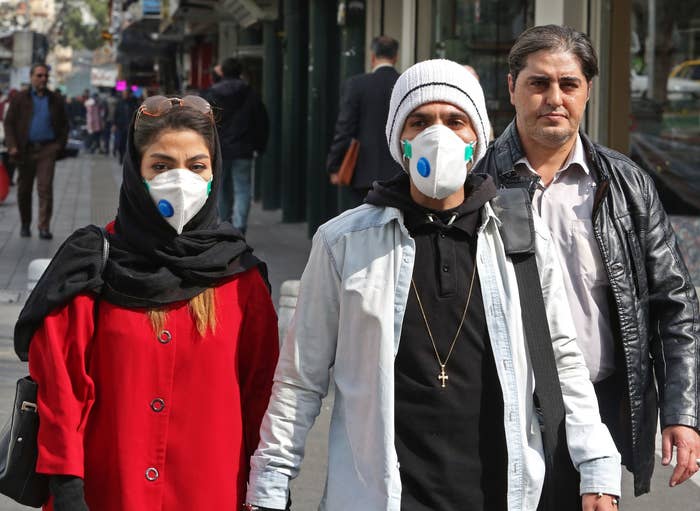 The World Health Organization on Monday declined to call the series of novel coronavirus disease outbreak flaring worldwide a pandemic, despite case numbers — and deaths — jumping precipitously over the weekend in Italy, Iran, and South Korea.

As of Monday, there are more than 79,000 reported cases of COVID-19 and 2,627 deaths worldwide, with the vast majority still in China. The growth of beachheads of cases in countries worldwide has experts worried that the outbreak could develop into a pandemic, a disease prevalent over the whole world. Pandemic status would not change our understanding of the severity of the disease, but signify its community spread to multiple nations outside China.

Here’s what the latest numbers and predictions mean:

35 Countries Are Now Reporting Cases
Cases are now reported from every continent aside from South America and Antarctica. Europe, East Asia, and the Middle East have emerged as the latest hot spots.

If COVID-19 does become a pandemic, outbreak models have suggested that anywhere from 40% to 70% of the world’s population might catch the illness, which appears extremely dangerous to the elderly or people with underlying health conditions.

In the US, the CDC is reporting 14 cases related to travel to China, and 39 cases among people flown back from either Wuhan or the Diamond Princess cruise ship. Facing pushback, the US government backtracked on Sunday from plans to move some of the passengers returned from the cruise ship from a military base to a FEMA facility in Alabama.

Three Countries Are Now Battling Sizable Outbreaks
South Korea now is the leading country outside China for case reports, with more than 800 centered around the city of Daegu, triggering a nationwide health alert. More than 450 cases have been linked to the Shincheonji Church of Jesus, widely considered to be a cult, and experts believe that number is still an underestimate.

Italy, reporting more than 200 cases, has canceled public events in and around Milan and the last days of Carnival in Venice. And over the weekend, Iran reported 12 deaths and 66 cases. In a disputed report, one government official claimed there have been as many as 50 deaths, in an outbreak that started last month. Schools have closed nationwide and a seminary is reportedly under quarantine in the city of Qom.

Asked Friday by BuzzFeed News whether the US would assist Iran, which is under international sanctions due to its nuclear program, in the case of a severe outbreak, a CDC official suggested that it would work through WHO to offer help.

China Is Reporting a Decline in New Cases
The outbreaks in other countries follow a WHO team in China declaring a recent downturn in new cases there in the last week, indicating a possible slowdown in the Chinese epidemic centered on the city of Wuhan. The epidemic there peaked on Jan. 23 and appears to have declined thereafter. On Monday, only about 400 new cases were reported in China, and in response, Wuhan briefly declared an end to its strict ongoing travel restrictions. The decision was reversed by the central government in Beijing an hour later.

“We’re still in the balance,” said the World Health Organization’s Mike Ryan, executive director of the Health Emergencies Programme, at a news conference. Ryan pointed to earlier containment of smaller outbreaks in Singapore and Thailand, and the unprecedented travel lockdown in China, as efforts that helped to slow the spread of the COVID-19 illness.

WHO Says It Still Doesn’t Have Enough Info to Declare a Pandemic
At the WHO news conference, Director General Tedros Adhanom Ghebreyesus emphasized that while a flu pandemic would be easier to declare under similar circumstances because doctors know how the virus works, too little is known about the most important means of transmission by the novel coronavirus to take such a step now. If the coronavirus were as contagious as the flu, it would be hard to understand how it has been contained as well as it has in China.

WHO leaders emphasized continuing to watch as the outbreak spreads.

“We don’t know what the reality could be in two months or six months,” said Ryan, adding that the coronavirus might be suppressed with warmer weather in the Northern Hemisphere in the coming months. “Or it could accelerate into a full-blown global pandemic.”

“It's exploded in the Middle East,” University of Toronto epidemiologist David Fisman told BuzzFeed News by email, pointing to recent cases in Kuwait, Bahrain, Oman, Afghanistan, Iraq, and Lebanon, all likely linked to Iran, he said. He and his colleagues suspect that the Iranian outbreak might already have more than 20,000 unreported cases.

This has also led some experts to argue that we should be switching the global focus from containing the spread of the virus to preparing for more cases of the illness.

Asked whether nations should start switching to preparation for large numbers of pneumonia cases rather than trying to contain each beachhead of the outbreak, WHO officials countered that containment still offered better use of resources, giving time for testing anti-viral drugs and developing vaccines, while watching to see if a turn to warmer weather helps knock down the virus. The CDC is still verifying that a genetic test it developed for labs nationwide is reliable, and has turned to its nationwide network of flu case surveillance to add looking for coronavirus cases to its duties.

On Friday, the CDC’s Nancy Messonnier suggested that it might be only a matter of weeks before US officials stop talking about containment of the coronavirus and instead to “mitigation” of the illness, based on plans for a flu pandemic, that would see widespread school and business closings.

“The day may come where we need to implement such measures in the U.S. communities,” Messonnier said.

A Pandemic Declaration Wouldn’t Mean the Coronavirus Is More Dangerous
In less than two months, the new coronavirus has turned into a global concern, because it is a virus to which humanity has had no previous exposure, no vaccine, and no innate immunity. Past experience with worldwide novel flu pandemics in 1957 and 1968 that killed more than 1 million people worldwide have raised alarms about the spread of COVID-19. The illness causes fevers, cough, and deadly pneumonia.

China has reported a high death rate, between 2% and 4% in Wuhan, and around 0.7% in outside provinces, according to the WHO team now visiting the country. For context, flu has a mortality rate around 0.1%. However, the high mortality rate in China likely reflects doctors in the midst of a severe outbreak seeing only the very worst cases, and not the ones that pass without symptoms. Regardless, the disease appears particularly dangerous to the elderly, with a 7% mortality rate in people over 65, according to China’s national public health ministry. The virus seems to present little risk to children, seen among them in only about 1% of cases in China.

Experts say that as more cases emerge across the world and blood tests that can pick up asymptomatic cases are developed, the fatality rate will likely decline.