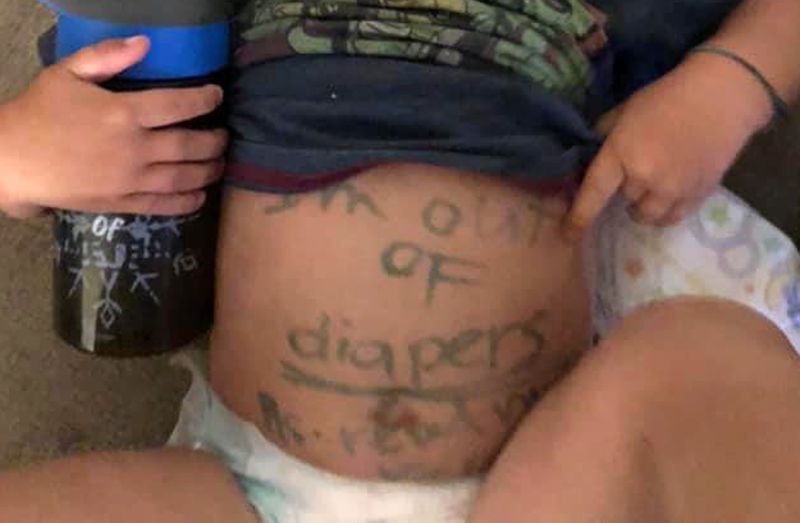 A Florida day care worker has been fired after writing on a child’s stomach to remind his mother to bring more diapers, a shocking move described in a viral Facebook post this week.

Heather Chisum said the day care, located in southwest Florida’s Sanibel Island, puts a daily report in her son’s lunchbox to let her know about his day and whether he needs anything for the following day. But the woman said she didn’t have time to read the report on Sunday, the day before the bizarre incident.


“I’m a single mom with a full time job and two very young children,” Chisum wrote. “SUE ME FOR NOT READING THE REPORT EVERY SINGLE DAY.”

She then made the stunning discovery while changing her child’s diaper Monday afternoon.

“Mom I’m out of diapers pls read my report,” read the message, which was apparently written with a marker.

The massive letters covered much of the toddler’s body and would not disappear even after she scrubbed it several times.

The teacher who wrote the message was fired Tuesday for breaching the day care’s professional ethics, the Children’s Education Center of the Islands told The News-Press, a local news outlet in nearby Fort Myers.

“We are reviewing protocols already in place to ensure that nothing like this occurs again,” the facility’s director, Cindy DeCosta, told the paper.

She also described how she sees “several teachers” when picking up her children at the facility and no one told her she needed to bring diapers.

“In the very worst case scenario, I can’t see anything other than ‘need diapers’ needing to be written,” Chisum said. “Why a big long message needed to be written across my sons stomach is beyond me.”

Her post drew immediate outrage on social media and has been shared more than 26,000 times.

“This is childish, unprofessional, and absolutely disgusting that someone would do this,” Alyssa Marie wrote in a reply to the post.

“This is down right disgraceful and very inappropriate,” Facebook user Debra Chaney wrote. “You’re trying your damnest to make a living and make everything work not only for yourself but your babies. Heather this is uncalled for I am so sorry this happened.”
By Midufinga on January 30, 2020