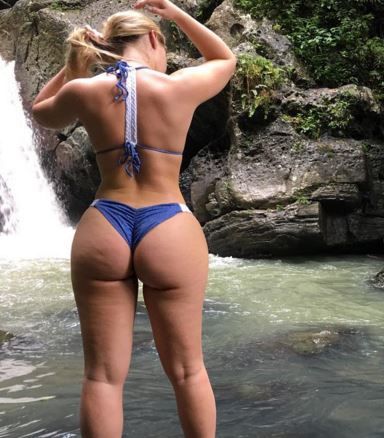 Hencha Voigt has half as many followers as ‘YesJulz,’ but prosecutors say she tried to leverage a hacked video to get paid $18,000.

An Instagram star and her boyfriend were arrested last year for allegedly extorting the “Queen of Snapchat” with her hacked sexual videos. This week, a court ordered the pair to unlock their phones to produce more evidence of their supposed blackmail scheme.

Julieanna Goddard goes by YesJulz on Snapchat where she has more than 300,000 followers, her publicist told The New York Times in June.

On Instagram, nearly 500,000 fans follow her modeling career and glamorous lifestyle. Her social media empire has translated to her own publicity agency and a number of lucrative advertising deals.

And with fame came misfortune.

Last summer, an explicit video of Goddard’s allegedly wound up in the hands of Hencha Voigt and Wesley Victor. Prosecutors say the couple then tried to shake down Goddard for $18,000, threatening to release the video if she didn’t pay up.

Like her alleged target, Voigt is also a social-media star with nearly 200,000 Instagram followers. She gained popularity by dating professional athletes and appearing on a show dedicated to their wives and girlfriends, WAGS Miami.

Voigt allegedly sent the a.ssistant screenshots and clips of the personal videos, telling her that the blackmailers would call from a “trap phone” to demand money.image

“Don’t threaten them, be super nice,” Voigt allegedly texted, according to court records. “U give them the money … And they don’t something with [the videos].”
Later, Victor allegedly demanded “18k cash” within 24 hours to return a USB flash drive with the videos. Bizarrely, Victor allegedly signed off by telling Goddard he was a fan.

“As I said you dope chick I like your movement,” the texts read, warning that “If I feel any fun business GAME OVER your choice have great day.”

He and Voigt were arrested on extortion charges the following week. During a police interview, Voigt admitted to owning one of the phones that issued the blackmail threats, although her lawyer has argued that both Voigt and Goddard were the victims of a photo hack, and that Voigt only messaged Goddard’s a.ssistant to warn her that the compromising videos had been stolen.

Last week, prosecutors asked a Miami-Dade circuit court to compel the pair to unlock their phones, and on Wednesday, Judge Charles Johnson ordered them to do it.

“For me, this is like turning over a key to a safe-deposit box,” Johnson said.
But the legal precedent for ordering a defendant to unlock their phone is more complicated than Johnson’s metaphor of a safe-deposit box.

In a handful of recent cases, courts have ordered defendants to unlock their smartphones, either with a password or their fingerprint. But privacy advocates argue that forcing a person to unlock their phone is tantamount to self-incrimination.

And in a high-profile 2016 legal battle, Apple fought the FBI’s request to unlock the phone used by one of the San Bernardino terrorists. The FBI eventually dropped the demand, having found a way to hack into the device.

Florida is one state with the clearest precedent in favor of compelling a defendant to unlock their phone. In making his ruling, Johnson cited a December ruling in a Florida appeals court in which a man suspected of taking upskirt photos was ordered to unlock his phone.

“We need to examine the laws and find a way to adjust to the digital age without compromising our rights as citizens,” Goddard told the Miami Herald. “In my opinion, in this particular case, it made sense for the court to rule for her to unlock the phone. The crime at hand is not a misdemeanor, it is a felony and was a serious offense.”

In a more succinct statement on Twitter, Goddard tweeted “dat way,” linking to a Miami Herald reporter’s tweet on the court’s ruling.

But precedent is against him, Johnson suggested when he handed down the order on Wednesday.